Removal of Large Shrubs to Make Way for a New Lawn

These large shrubs, which are Cotoneaster, had become too

big for the area where situated. Residents were not happy at their view being partially blocked plus the size of the shrub could allow a person to hide behind or be obscured so the decision was made to remove the shrub and roots. After the shrubs have been cleared the area is going to be turfed and made into a new lawn that will match the other grass area

to the opposite side of the entrance, balancing the look of the building and also providing a clearer view of the street for vehicles leaving the car park.

Cotoneaster is a Tough Shrub

Once established Cotoneaster is a very tough shrub and is

used for many applications where abuse can occur, for example, in public places, municipal areas, embankments. The growth on this shrub is dense and compact with branches that are springy, this is why the shrub can withstand some abuse because the branches do not snap easily and usually just take an impact and spring back into

place. This trait does make the shrub hard to cut back so when trimming with hedge cutters the cutting blades must be sharp otherwise the ends of the branches will just rip off and look very untidy, also if cut back too hard the foliage will be removed just showing a mass of bare branches underneath.

Cutting Down and Removing a Large Shrub, stump and Roots

However we were removing the Contoneaster completely and the best piece of equipment for the job was a long handled chainsaw, utilising this tool we can cut lower down

toward the stump where the branches are thicker and also the reach of the long handle allowed us to reach further into the shrub past the smaller twigs and branches. Once cut the branches and foliage were pulled free and moved onto the vehicle for removal. We then worked through the whole area until the bulk of the shrubs had been cleared away. With the bulk removed we then concentrated on cutting off and removing the lowest branches as well as clearing all the litter and rubbish that had accumulated underneath the shrub over many years.

With all this cleared we were then left with the stumps that needed removing. The easiest way to remove stumps is by digging and pulling them out with a small digger, however for a job of this size this was not cost effective plus with the close proximity of the railings we did not want to risk disturbing their footings. Although it would be laborious work the stumps would need to be dug out by hand. Firstly we dug around a stump with a spade to expose any roots, once exposed the root could then be cut with a pair of lopers. Repeating this method until the stump could be worked loose enough to expose the last roots underneath and with a final cut with the lopers and a lot of hard work the stumps would come free.

With the stumps removed we then loosened the top of the soil and raked level. As this was carried out in January it was too cold to lay down the new turf and this will have to wait until early spring when the conditions will be more favourable for the new grass to survive.

What is Commercial Gardening 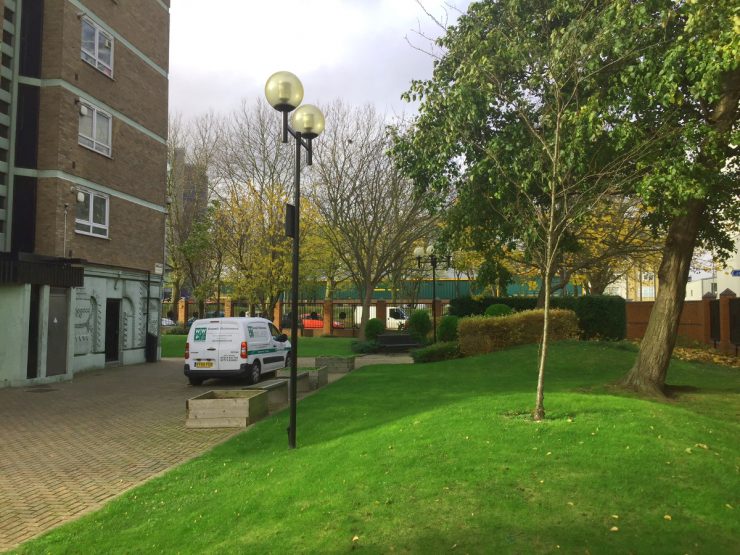 What is Commercial Gardening Fundamentally by providing our garden services to other businesses we are a commercial gardening company, but this statement although concise does over simplify the sector we are in, it is in fact much more diverse than this with a variety of clients with differing requirements and a variety of gardens and […] 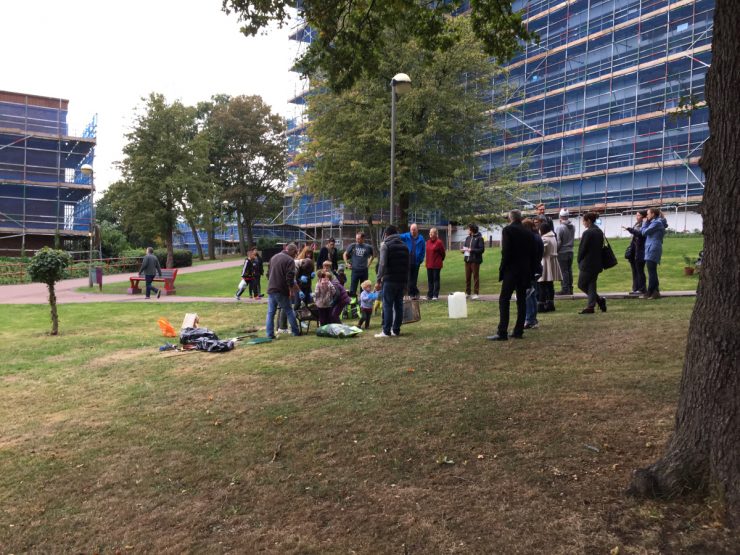 Tree Planting We jumped at the chance to offer our services and assistance for one of our major clients on their tree planting community day this October. This was on a very large estate in Wimbledon where we are contracted for garden and grounds maintenance and was a good opportunity for WWP to give something […]

Growing Season Now Longer Than Ever 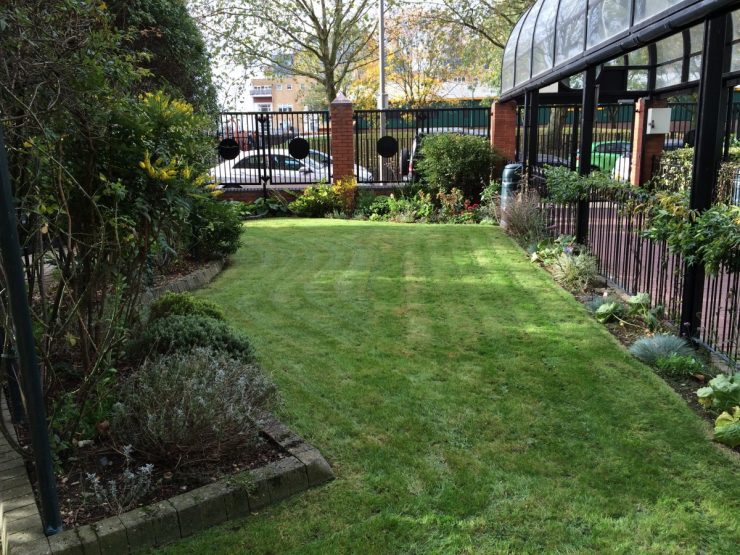 From the first email exchanged with World Wide Plants they have been extremely courteous and professional in overseeing the smooth transition from the previous grounds maintenance contractor. Their knowledge and advice meant significant savings were made and the gardens and grounds look better than ever. As an Estate Manager time is of the essence and […]

Hands on tenants most welcome on this contract 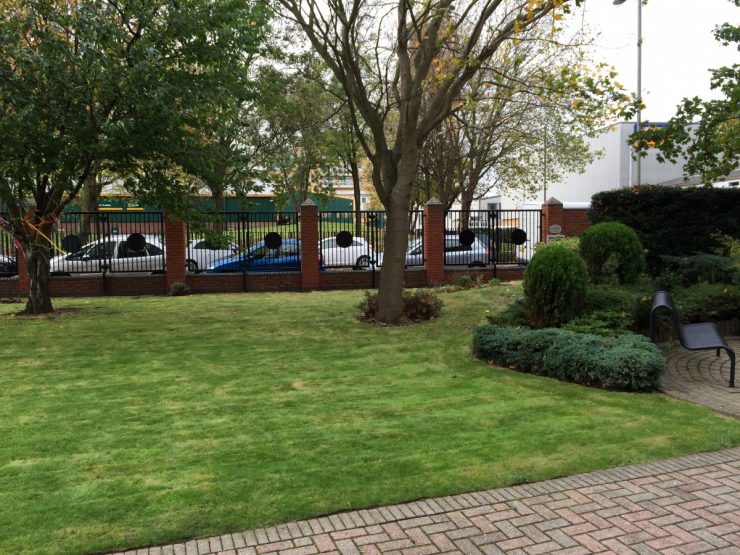 Grounds Maintenance Contract We were very pleased to take over this grounds maintenance contract in November, not just because this is a nice site with lots of potential but also because the tenants show an active interest in the gardens and have a very hands on approach. The tenants have certain areas of beds that […] 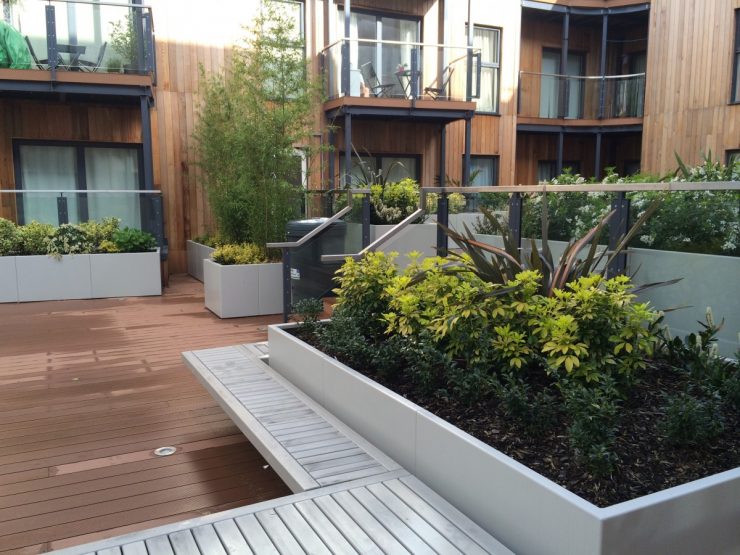 We currently provide garden maintenance on an increasing amount of rooftop gardens, with these areas becoming very commonplace and even a planning requirement on new developments, these provide areas that can be used and enjoyed by residents or employees, in fact most rooftop gardens that we maintain are not actually right at the very top […]